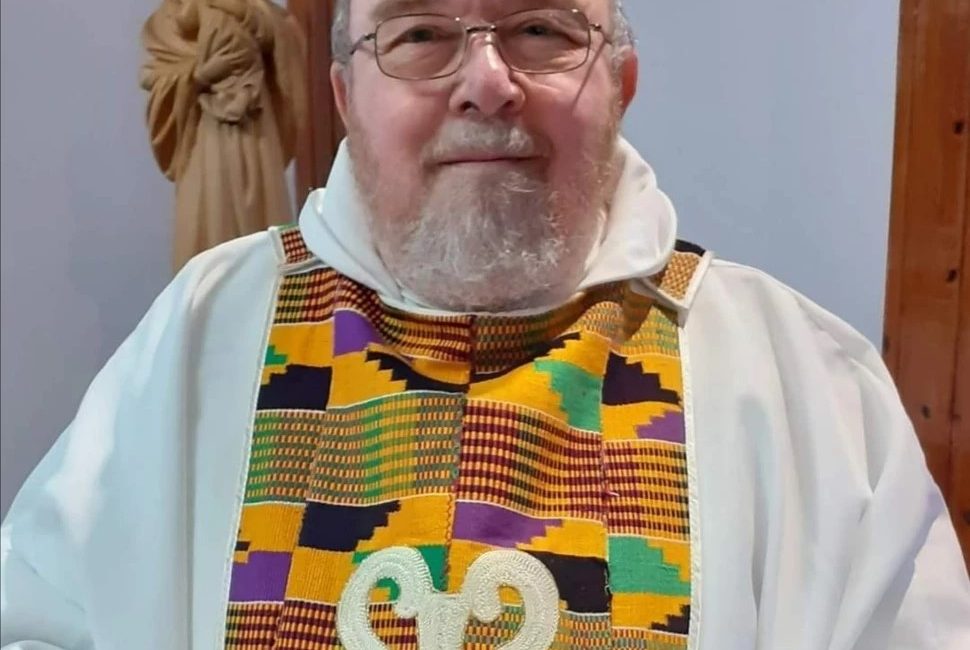 Fr. Terry Donnelly, C.S.Sp. a member of the Congregation of the Holy Spirit, and the community leader of the Spiritan Community (Holy Ghost Fathers) in Carfin died on Tuesday 7th September. Fr Terry passed away at 2.00 AM, in Wishaw General Hospital, after an operation carried out on him the day before.

The Provincial Leader, Spiritans, British Province, Fr Ugo Ikwuka, C.S.Sp., wrote that however devastating Fr. Terry’s sudden death may be, “Yet, we must thank the Lord for the gift of Fr. Terry and his great witness to God’s love. We thank his family and our Spiritan confrères in Motherwell, Scotland, for their characteristic loving response. They were there for Terry, and he was spiritually prepared for the journey.”

The Bishop of Motherwell Diocese, the Rt Rev. Joseph Anthony Toal, offered the following words at the news of the death of Fr Terry:

“It is very sad to hear of Fr Terry Donnelly’s death and I and the whole Motherwell Diocesan community join with his sister, Margaret, and all his family, and his brothers in the Holy Ghost Fathers in grieving his loss. We thank God for his vocation and ministry as a missionary priest and ask the Lord to bring him fully now into his presence in eternal life. For many of us in the Diocese, we have come to know him well in recent years and his service as a priest has been much appreciated, particularly in recent months in St Vincent’s, East Kilbride. He will be very much missed in his own community and in the Diocese.

Eternal rest grant unto him, O Lord, and let perpetual light shine upon him. May he rest in peace. Amen.“

The Spiritans and the Family have scheduled the funeral rites of our brother, Fr Terry as follows:

On Thursday, 16th September, 6.00 PM
At the Parish of St Francis Xavier and Shrine of Our Lady of Lourdes, (Carfin Grotto). Taylor Avenue, Carfin. ML1 5AJ.

The body is reposed in our Spiritan Community Chapel, Carfin, for the night.

On Friday, 17th September, 1.00 PM. (led by the Bishop of Motherwell)
At the Parish of St Francis Xavier and Shrine of Our Lady of Lourdes, (Carfin Grotto). Taylor Avenue, Carfin. ML1 5AJ.

Eternal rest grant unto Fr Terry, O Lord, and let Your perpetual light shine upon him.
May his soul and the souls of all the faithful departed rest in peace. Amen

Leave a Reply to Deacon John A McGarry Cancel