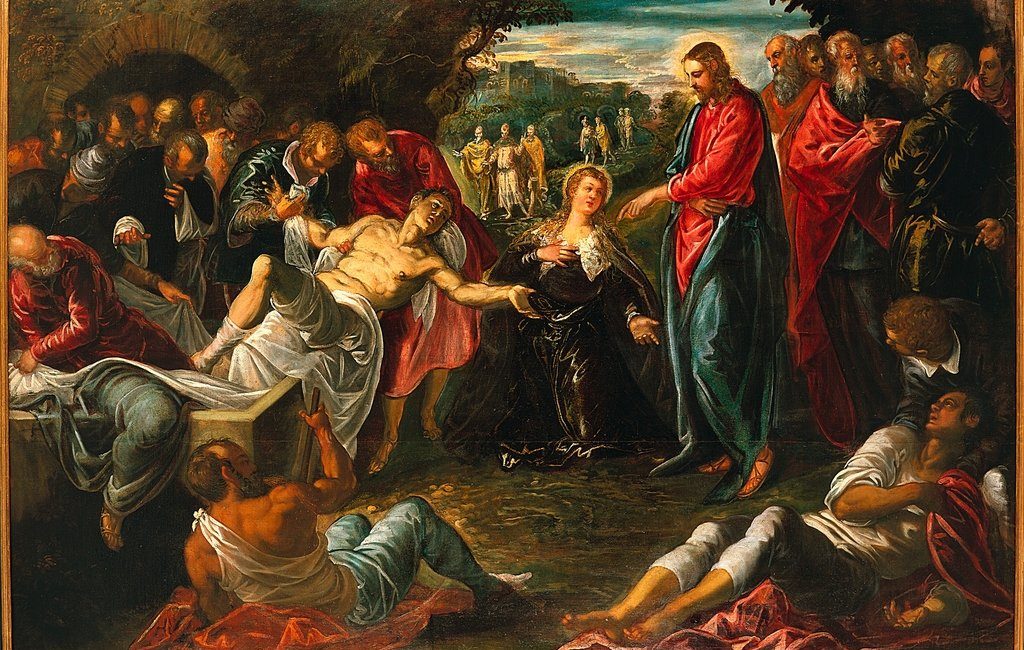 … Unbind Lazarus and Set Him Free!

There are three times in the Gospels that Jesus raised somebody from the dead: the young daughter of Jairus, a synagogue official, who was raised in her father’s house; the son of a widow who was raised as he was being taken to the cemetery, and Lazarus in this Sunday’s Gospel, already buried for four days. While these people are all raised to life physically, St Augustine recognises that Gospel events, like sacraments, always communicate deeper spiritual realities. So, he interprets death more pertinently here in a spiritual sense – in the sense of sin. Recall as the father of the prodigal son spoke of the sinful wayward life of his son in terms of death: “He was dead and has come back to life” (Luke 15: 32).

In this sense, Augustine sees the death of the young girl whom Jesus raised in the house as depicting those sins which are locked up in our minds and hearts e.g. hatred, lust, envy. These haven’t manifested in our actions but internally we have given in to them hence they are festering inside and poisoning our thoughts and our imaginations. In consenting to them, we have died. In raising the young girl, Jesus reminds all of us who have such interior sins that he can bring us to new life.

Augustine sees the death of the young man who was being carried outside the gates of the city in terms of sin that has come out of the mind and heart and manifests in our action e.g. hatred expressed in gossip, anger expressed in violence, lust expressed in sexual immorality. In raising this young man Jesus teaches us that we who have died in our souls by such actions can be raised and come to new life.

Finally, Lazarus who is already buried and stinking in the tomb symbolises those trapped in habitual sin. Sin has not only come out of the heart into action but has now become a stinking habit: one is habitually gossiping, lying, cheating, selfish, violent, envious etc; one is now addicted to drugs, sex, gambling etc. Thus, Lazarus depicts the worst kind of sin. But Christ comes into this situation and raises Lazarus. Jesus goes into this furthest, smelliest, most disagreeable state and there invites us back to life.

Thus, no one is irredeemable. However far you have strayed, whatever graves you are in, whatever is limiting your life, no one is beyond the reach of God’s redemptive mercy. It is quite disheartening that many have taken their lives because they feel hopeless in their condition e.g. in their addiction. Jesus wept as he approached the tomb of Lazarus, aggrieved at how sin could cripple and diminish us, his special creation. Jesus is weeping and calling out for you. As St. Irenaeus declared “the glory of God is the human being fully alive”.

The raising of Lazarus was the most astonishing of all the miracles of Jesus to the people of the time. Traditional Jewish belief then was that the soul of a dead person somehow remains with the body for three days after which it departs finally from the body never to return. It is then that decay sets in. It was such a view that Martha expressed in the Gospel when she objected to the opening of Lazarus’ tomb because as she said “already there is a stench because he has been dead four days”.

Perhaps, Jesus intentionally delayed coming to the funeral to let the situation appear “impossible” before acting on it. For the followers of Jesus therefore, the miracle is a challenge that they should never give up hope even in the hopeless situations in which they found themselves. However, we cooperate by faith for divine intervention. In the raising of Lazarus, such faith is expressed through simply obeying instructions.

Jesus issues three commands and all are obeyed to the letter. First, he asked that the stone be rolled away and the people did. Apparently, it must be difficult to come to terms with that weird instruction given the state of the body. Yet, in obedience, they went ahead to roll out the stone without asking questions. Again, Jesus could have commanded the stone to roll away all by itself, without bothering the people, but he didn’t. Why? Because divine power seems always to be activated by human co-operation and stifled by non-co-operation. This equally goes to show that God will not do by a miracle what we can easily do ourselves.

The second command is directed at the dead man. Jesus ordered Lazarus to come out and he gropes his way out of the dark tomb even with his hands and feet tied up in bandages, and his face all wrapped up. The lesson here is that even a man rotting away in the tomb can still do something to help himself. We need to be ready to take the step to come out of the place of death. We need to make the move to get hold of God’s saving hand extended to us.

The last command is again addressed to the people. Jesus asked them to unbind Lazarus and set him free. Even though Lazarus could stumble himself out of the tomb, there was no way he could unbind himself. He needs the community to do that for him. By unbinding Lazarus and setting him free, the community is accepting Lazarus back as one of them. Thus, the community also has a role to play in the full rehabilitation of her strayed members. Are we ready to unbind and accept one another especially those among us who are coming back from the place of death?