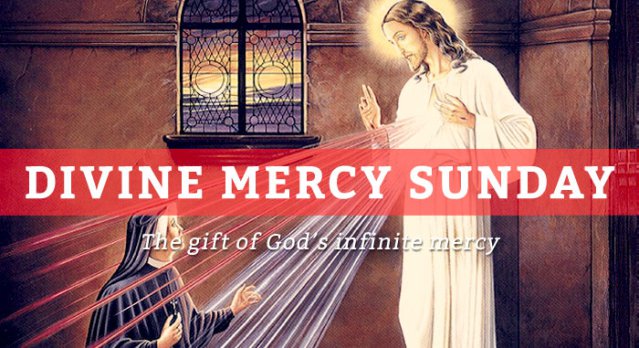 Divine Mercy – Healing of Wounds and Division in the Community

The fire that engulfed the Notre Dame Cathedral in Paris kindled nostalgic memories in the many that have visited as pilgrims from around the world. But it must have also stirred the memories of those that have read Victor Hugo’s classic romantic novel The Hunchback of Notre-Dame. The protagonist of the novel is Quasimodo, the half-blind hunchback bell-ringer of the Cathedral. He was so named because he was born on the Sunday after Easter which is traditionally known as the Low (Quasimodo) Sunday. The Sunday is considered ‘low’ apparently in contrast to the preceding highly eventful Easter Sunday.

However, on April 30, 2000 (Sunday after Easter), as he canonized the Polish nun Sr. Faustina Kowalska who died in 1938, Pope John Paul II designated Sunday after Easter as Divine Mercy Sunday in honour of the saint. Sr. Faustina was gifted with extraordinary visions and experiences of the Lord Jesus. The most famous of these was the Lord revealing his sacred heart from which came rays of light, red and white which she interpreted as the radiating forth of the Divine Mercy.

It was significant for John Paul II that Sr. Faustina died as the curtain drew on World War II in which Poland had been decimated by Hitler’s men. He recognised the 20th century as perhaps the bloodiest in human history hence in most need of Divine Mercy. He therefore saw in the visions of Sr. Faustina an indication that God wants to specially bestow His mercy on the dark century.

Divine Mercy is mostly manifested in the forgiveness of sins as clearly evident in the events of this Sunday’s Gospel. Cowering behind closed doors were the disciples of Jesus who had abandoned their master at the moment of truth. How very awkward they must have felt as Jesus suddenly appeared in their midst. They must have been scared too that the moment of reckoning has come; the moment of telling off and dressing down, not only for their cowardly behaviour but also for their lack of faith in him.

But instead Jesus pronounced peace on them; they had been unsettled and needed that healing of their guilt and awkwardness. The risen Jesus shows his hands and his side lest they forget what they and the world did to him, but he did not follow with words of rebuke, only words of mercy. He goes further to empower them to become the agents of that healing mercy of God in the world; he breathes on them and says, receive the Holy Spirit, whose sins you forgive, they are forgiven, and whose sins you retain, they are retained.

The great G.K. Chesterton was asked why he became a Catholic and he said: ‘to have my sins forgiven’. Yet, forgiveness of sin is not only about going to confession; it involves the healing of wounds and division between God and people and between people as brothers and sisters in one family based on truth, love and justice. It was therefore to their credit that the disciples could come together that soon without trading blames over that show of shame at the trial of Jesus. That too is a significant witness to the resurrection.

As their shaken faith was strengthened in community by the visit of Jesus, so is our faith strengthened in Christian fellowships as we do at Mass. “For where two or three are gathered in my name, I am there in their midst” (Mt 18:20). A piece of charcoal blazes red hot in the bonfire so long as it is in the group, but once isolated it fades. That is what happens to our faith when we isolate ourselves from the worshipping community. It wasn’t a coincidence that Thomas who isolated himself when Jesus visited remained in doubt.

Some believers no longer subscribe to organised religion and this is understandable given all the abuses that go with institutionalised churches. But should we throw away the baby with the bath water? Organisational psychology insists that a bad meeting is better than no meeting at all; those informal chats before and after the meeting help. Following the 2016 American elections, in his book Alienated America, Timothy Carney investigated why so many Americans feel depressed as though the American dream is dead for them.

He visited parts of America where industries folded or relocated leaving people unemployed or without decent living wages. He observed that while some of those communities collapsed, others bounced back and even thrived. The difference was that the thriving communities had functioning networks of families and churches. Carney realised that the American dream involves a lot more than a well paying job. Even more important is having a network where a person feels needed and loved. Those communities where families were breaking apart and churches were shrinking tended to sink, often into alcohol, drugs, isolation and even suicide.

Yet, Thomas stands for the skeptic or doubter in all of us. “Unless I see with my own eyes … I will not believe.” The risen Jesus invites him to touch his wounds but it doesn’t seem that he did. He rather exclaims, “My Lord and my God!” which is the greatest confession of faith in all the Gospels. He is thus the first to attest to the divinity of Jesus. We too have our doubts. With all the evils in the world, sometimes we even doubt the existence of God. A frantic father who wanted his disturbed child cured prayed Jesus, “I do believe Lord, help my doubts” (Mark 9:24). That too should be our prayer whenever doubts assail us. St. Thomas, the patron saint of doubters was there before us. He would surely intercede for us when we call on him in our own moments of doubts.