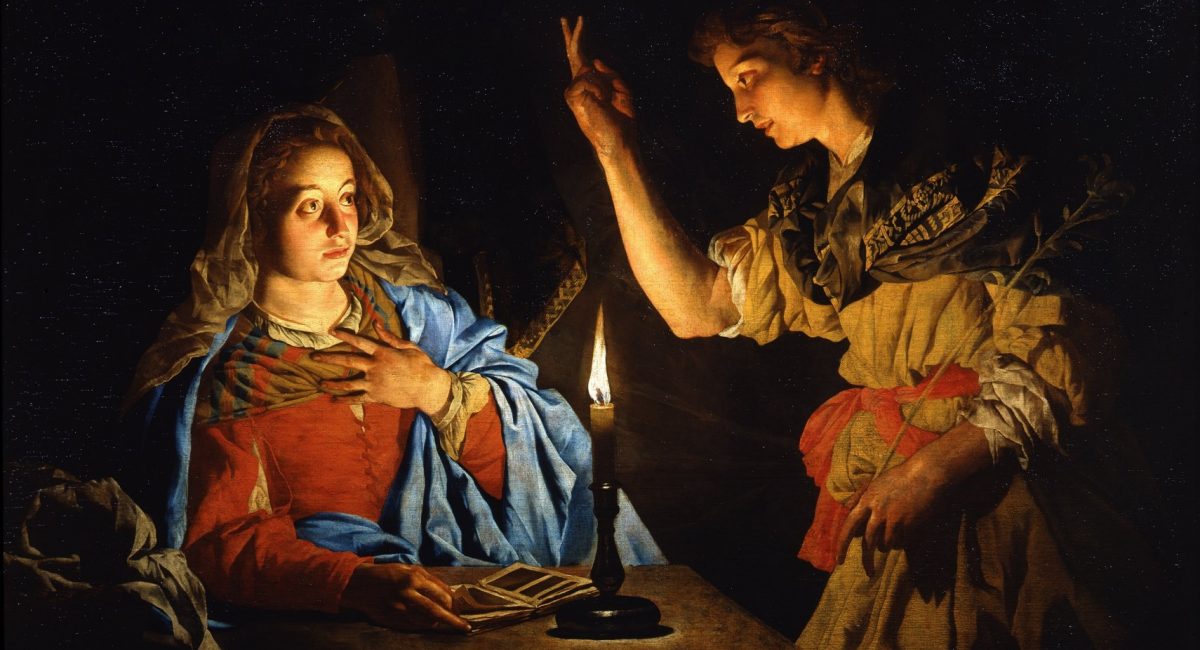 Could I ever be like Mary, a “handmaid of the Lord?”

Amy, and her best friend, Jessica were participating in a nativity play at school. Jessica was playing Mary, and Amy was an angel. Before the show, a little boy in the cast was going around the dressing room repeating, “I’m a sheep, what are you?” Each child responded politely, including Amy, who proudly declared she was an angel. The boy then turned to Jessica who was still struggling into her costume with her mother’s help. “I’m a sheep, what are you?” Jessica simply said, “I’m Mary.” Realizing he was face to face with a lead character, the boy felt he needed to justify his own role. “It’s hard being a sheep, you know,” he said with all the seriousness of a 5-year-old actor with a big part. Jessica’s innocent response was equally bang on witty. “Yes, but it’s also hard being a virgin, you know.”

Indeed, to be the virgin mother of Jesus is not a child’s play. Yet, that’s what we are all called to be. Yes, following his birth in Bethlehem, Jesus desires that he be reborn in the hearts of believers. In this sense, all – both men and women, can give birth to Jesus in and through their hearts. Jesus shows how this works when he was told that his mother and his brothers were looking for him and he replies: “Whoever does the will of God is my brother and sister and mother” (Mark 3:31-35).

To reproduce Jesus in and through our hearts, we therefore need to make the prayer of Mary in today’s Gospel our own: “Here am I, the servant of the Lord; let it be done to me according to your word.” To be the mother of Jesus in this sense is attained by saying “Yes” to God as Mary did even when God appears to demand from us what is humanly impossible like asking Mary to be a virgin mother.

Once, in the Metropolitan Museum of Art in New York City, I was listening to the commentary on the painting of the Annunciation. The narrator explained the various features of the painting and then spoke about the dove over Mary and the Angel’s head. Of course the dove represented the Holy Spirit.  Rays of light emanated from the dove and seemed to be entering into one of Mary’s ears. The narrator explains that the artist depicted the weird theory that since Mary was a virgin and remained a virgin, the conception of Jesus took place through her ears, leaving the rest of her body virginal.

But the commentator obviously missed the artist’s point which was that Mary HEARD and accepted the Word of God. Mary had yet to learn what her “Yes” to God would involve but it was made unconditionally and was never withdrawn. Through a life of trials and tribulations right up to those terrible moments as she stood beneath the Cross and saw her only Son die like a public criminal, in agony and shame, she never once withdrew that “Yes”. That “Yes” eventually proved to be the greatest prayer ever said. It led to the greatest event in human history – the Word of God taking flesh through her and dwelling in the womb of a lowly maiden – God becoming human in Jesus.

That same Word of God whispers into our ears, calling us to cooperate as Mary did, in the mission of making the Saviour real to those who long for his presence.  How disturbing that this prayer is so different to our own everyday prayer whereby we present our own intentions and seek that God do our will. Saying “Yes” to God (Thy will be done) is the one prayer that is sure to be answered and with the best outcome, for God wills the best for us. But we can frustrate God’s plans and purposes for us as we push our own selfish agenda.

Both readings of today’s Mass are linked in affirming the abiding mystery of God’s providence. Just when we are tempted to despair, the Bible interrupts us and says ‘wait a minute’. God works in subtle ways and it often takes time for God’s plans to be fully realised. That’s why advent rightly calls us to wait in sure hope. In the First Reading, the well-established King David felt the need to build a befitting house for God since it wasn’t fitting that he lives in a cedar mansion while God dwells in a tent. However, God reminds David that He (God) has been the one providing for him (David) so He would be the one to build David a house.

But while David was thinking of a physical temple, God was talking about the royal house of David – the kingly dynasty that was meant to last forever. Indeed, this dynasty lasted for a long time but it sadly came crashing down after 400 years with the Babylonian conquest of the Jews and their subsequent exile. Yet, despite the catastrophe that clearly suggested a false promise, the Jews kept their hopes alive, even in captivity. For about 600 years, they waited and watched until the Angel Gabriel spoke to a lowly girl in an equally insignificant town of Nazareth as we read in today’s Gospel. She was betrothed to Joseph OF THE HOUSE OF DAVID.

Greeting her as full of grace, the Angel announced that she would conceive in her womb and bear a son to whom the Lord God would give the throne of his ancestor David, and he would rule over the house of Jacob forever and of his kingdom there would be no end! The promise wasn’t broken after all! In fact the full meaning of God’s promise was revealed as the royal house of David eventually proves to be pointing to the real temple where God would dwell – the womb of Mary, a fitting place of perfection without any trace of sin or evil. And, indeed, one of the titles we give to Mary in the Litany of Our Lady is “The Ark of the Covenant”.

God’s promises never fail. They are fulfilled but in most unexpected ways. Mary’s elderly cousin Elizabeth, well past the age of child-bearing, is going to be a mother also because “with God nothing is impossible.” In the Second Reading, Paul exploded in praise of the Good News that, in Christ, the free gift of salvation, promised to the Jews of old, was now available to all humankind. As people prone to despair, inspired by these readings, we are called to wait on the Lord with a sure and certain hope.