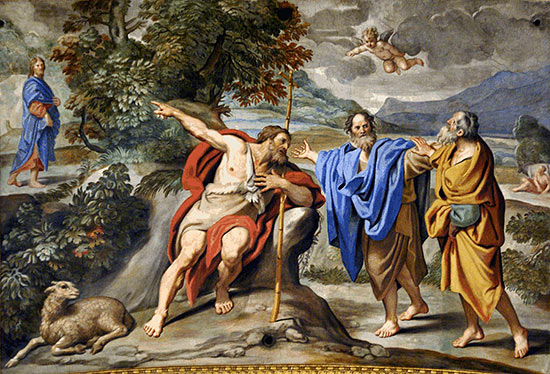 Behold the Lamb of God!

How many people like to hear that the person who succeeded them is doing better than they did? Not many surely. Yes, even priests struggle with the success of their successors. But John the Baptist is the rare exception. John started the Kingdom of God movement but Jesus succeeded him after Herod had imprisoned and subsequently executed him. Yet, whenever John speaks of Jesus, he speaks of him as superior. He describes Jesus as the bridegroom and himself as only his best man (John 3:29).

On seeing Jesus in this Sunday’s Gospel, John declared: “Here is the Lamb of God who takes away the sin of the world! This is the one of whom I said: After me comes a man who ranks ahead of me because he was before me” (John 1:29-30). As a result of this endorsement, two of John’s disciples left him and followed Jesus.

John the Baptist summarised his whole attitude to Jesus in one statement: “He must increase, but I must decrease” (John 3:30). He is so content with playing the second fiddle than vying for the limelight with Jesus because he knows exactly the reason for his being in the world: “I came baptizing with water … that he might be revealed to Israel” (John 1:30). Because he knows why he came into the world, John can tell when he has done his bit and when it is time to hand the baton to another.

Why did you come into the world? What is God’s plan for your life? If you do not have a personal answer to this question, chances are that you will spend your life chasing after everything and nothing in a rat-race of envy and jealousy towards real and imagined rivals. Some may even be driven to eliminate those they perceive as standing in the way to their personal fulfilment. In a world of competition, the example of John the Baptist shows us that true personal fulfilment and greatness lies not in how we may compare with others but in how faithful we are to our God-given roles in life.

John’s mission of pointing out the Lamb of God to the world is not different from the mission of every Christian.  But, to be effective in this mission, we need to know the person (identity) and mission of the Lamb (Jesus) which is what John revealed.

In the Bible and in many cultures, the lamb is the symbol of innocence; it is harmless and can only suffer evil. In some traditional societies like the Igbo of south-eastern Nigeria, the lamb is used to cleanse a desecrated land to save the community from perishing (divine wrath). The lamb (victim) is bound hands and feet and dragged rough through the community thus cleansing the land in the process as it takes the evil on the land on itself unto death.

This draws a chilling parallel with the Suffering Servant about whom Isaiah prophesied over 500 years before Christ: “… he bore our sufferings and carried our sorrows … he was pierced for our faults and crushed for our sins. On him lies a punishment that brings us peace, and by his wounds we are healed” (Isaiah 53).

The title “Lamb of God” could be traced back to the great Jewish feast of the Passover. As a final assault on Pharaoh who kept reneging on his promise to free the people of Israel from slavery, every Egyptian firstborn child was slated for slaying. The Israelites were to smear their doorposts with the blood of a lamb so that when the Angel of Death struck, he passed over their blood-marked houses and their children were spared. In effect, they had been saved by the blood of the lamb.

That night before Israel departed Egypt, they had a final meal which included a roast lamb, the same lamb whose blood had been smeared on their doorposts. The lamb then becomes the sign and symbol of the liberation of God’s people from slavery and oppression. This great liberation event of the Exodus which is still marked today by the Jews worldwide was commemorated in the Passover meal which Jesus celebrated with his disciples at the Last Supper.

There, Jesus took the place of the Passover Lamb when he offered bread as his body and wine as his blood in anticipation of his sacrificial death on the cross the next day to save the world. It is in this sense that John addressed Jesus as the Lamb of God that takes away the sin of the world i.e. Jesus is the new Lamb that liberates people from the oppression of sin and evil (the new Egypt).

It is no coincidence that Jesus’ sacrificial death took place at the Passover as it is the sacrifice that definitively reconciled humanity with God. All preceding sacrifices and atonement rituals were ultimately perfected by Christ’s own sacrifice at the Last Supper and on the Cross which we are privileged to recreate at the sacrifice of the Holy Eucharist.

When we say or sing: “Lamb of God…” at Mass, it should remind us of what Jesus did for us and what he has empowered us to do for others; we recall his sacrifice to make God’s love real on earth and we remind ourselves that joining Jesus in sacrificial love (self-giving) is the only way we can effectively point him out i.e. be his effective witnesses in the world as John did.